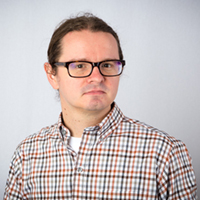 Daniel joined NC LIVE as the Web and Database Development Librarian in September 2017. His responsibilities include maintaining and updating the NC LIVE website, supporting the proxy service, and planning the implementation of new web systems.

He completed his undergraduate education at Whitman College in Walla Walla, Washington (say that three times fast!), and received his Master’s in Information Science from Indiana University Bloomington in 2010.

Since making his first website in middle school, Daniel has wanted to build awesome websites. Most recently, he worked for Indiana University Communications, helping various schools and departments to redesign their websites.

In addition to programming, Daniel has a passion for games of all kinds and loves exploring the world by bicycle. If the whole programming thing doesn’t end up working out, his backup career is to be a piano-based rockstar.